Review: Wolf Moon’s ‘How Do You See Yourself’ 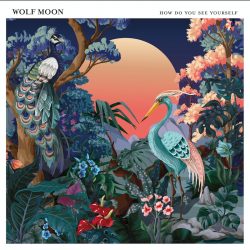 London band Wolf Moon, led by Jimmy Owen and Kelly Lethbridge, carry on the singer-songwriter tradition of artists like Ryan Adams and the duo work of Fleetwood Mac’s Buckingham-Nicks. They recently released their second album under the Wolf Moon moniker, How Do You See Yourself.

“Variations on a Feeling” begins the album with effortless, soulful grooviness. The otherworldly harmonies of Owen and Lethbridge are on display from the start, and are especially affecting during the chorus.

“Tell Me What I Don’t Know” goes in a different direction. The upbeat track has a solo Lindsey Buckingham feel, in the chorus especially, and also thanks to some Buckingham-esque fingerpicking. The big, melodic chorus comes out of left field, but also somehow fits the vibe well.

Wolf Moon are certainly groove oriented, as they prove on the herky-jerky rhythms that begin “Frozen Love” before it expands into a rather pretty pop song. Poppy, dance-y “Give My Heart” follows, adding another layer to the bands expansive sound palette.

They slow down a bit with “Love in the Sun,” a sunshine single if I’ve ever heard one. The vibe continues with “Just to Hear It Back,” which features some cool guitar harmonies. “Hold On” is is more than a little influenced by 80s Fleetwood Mac, “Colours I Dream In” is another affecting ballad, and “Smiled At By You” is another showcase for Owen and Lethbridge’s harmonies.

How Do You See Yourself ends with “Very Best Version of Me,” another effortless pop track that swings with sunniness. It epitomizes the album well.

Check out How Do You See Yourself.