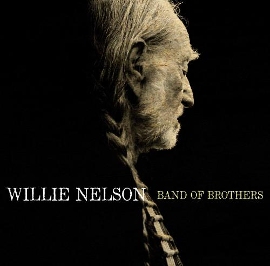 The Legend of Willie Nelson Continues

Willie Nelson somewhat quietly released some of the best albums of his career throughout the 2010s. He continues to do so today, but the older he gets, the more people seem to pay attention. Which is a good thing.

As with his current releases, 2014’s Band of Brothers found Willie’s voice a bit weathered, but in a good, bluesy sort of way. Compared to his more recent albums, his voice is relatively strong, though. His guitar playing, which still hasn’t lost a step, had its usual mastery of texture and feeling on the album.

Band of Brothers continued a 2010s hot streak for Nelson.

The Star-filled Variety of Heroes

His prior release, 2012’s Heroes, was one of his most eclectic, featuring the beautiful “A Horse Called Music” and “Come on Up to the House,” duets with Merle Haggard and Sheryl Crow respectively.

Other highlights included the humorous social commentary of “Come on Back Jesus (And Bring Back John Wayne on the Way)” and toe-tapping marijuana homage “Roll Me Up and Smoke Me When I Die,” which featured Snoop Dogg and Krist Kristofferson.

The final track, an emotional cover of Coldplay’s “The Scientist,” is one of Willie Nelson’s best late-era tracks. It simply blows away the original.

Band of Brothers isn’t quite as varied in sounds, and doesn’t feature any big names, but it’s a more subtle and coherent album.

Back to the (Outlaw) Country

The arrangements on Band of Brothers conjure classic ’70s outlaw country with its tasteful mix of sparse percussion, clear, high-pitched harmonica, and textured pedal steel and keyboards. It also finds Nelson writing again, the majority of the songs being new compositions.

Reflection and quiet strength are two predominant themes. Opening, laid back “Bring it On” is Waylon-esue and beautiful. “Whenever You Come Around,” “I Thought I Left You,” and “Send Me a Picture” are meditative and forlorn, focusing on Willie’s cadence and guitar playing.

A handful of tracks aren’t as reflective but are no less effective. “Wives and Girlfriends” (“I love my wives and I love my girlfriends/but I hope they never meet”) is the sort of effortless humor found all over classic country. Fun “Used to Her” (“when I get used to her/I get sick of me”) and “Crazy Like Me” swing.

The biggest highlights of Band of Brothers, though, are the affective “songwriter’s songs.”

“The Songwriters” is a tribute to the work and paradoxes of songwriting: “We write bridges/and cross ’em/and burn ’em/we teach lessons but don’t bother to learn ’em.” “Guitar in the Corner” emotionally covers the same territory:

There’s a guitar in the corner

That used to have a song

I would hold it while it played me

And I would sing along

There was a happy song about her

But the strings no longer ring

And things are not the way they were

Now when I need a song

My mind goes back where I belong

When I’m not there

And the future is not clear

And the past is just a smoke ring in the air

Hard To Be An Outlaw

The best songs on Heroes are a trio towards the end of the album. Willie teams up with Jamey Johnson on Billy Joe Shaver’s soulful, stunning “The Git Go”:

They keep printin’ money ’till they get in way too deep

They’re too busy workin’ on their next term

Politicians keep makin’ fools out of you and me

Lord, it’s always been that way

Money breeds war, as long as there’s a man alive

Rich kids go to college, and the poor kids fight

High-rollers crap out every time, roll a soldier’s bones like loaded dice

War is the beast that makes every mother cry

Lord, it’s always been that way

He told the truth, and they hung him up to die

The son of God who created you and I

He said it in the Good Book and letters in red

But we keep on forgettin’ every thing He said

Jesus Christ hung on the cross for you and I

Lord it’s always been that way

Shaver’s “It’s Hard to Be an Outlaw” is equally poignant:

Some super stars nowdays get too far off the ground

Singing ’bout the backroads they never have been down

They go and call it country, but that ain’t the way it sounds

And it’s hard to be an outlaw who ain’t wanted anymore.

And it’s hard to be an outlaw who ain’t wanted anymore.

Lilting mid-tempo “Band of Brothers” is practically Willie’s answer: “”We’re a band of brothers and sisters and whatever/with a mission to break all the rules.”

Jumping final track “I’ve Got a Lot of Traveling to Do” was prophetic. Nelson still makes quality albums and tours practically incessantly, continuing a hot streak that began even before Heroes and will last as long as he does.