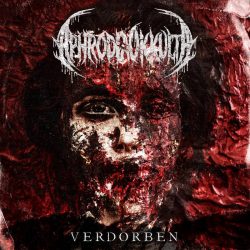 German musician, songwriter, and singer Alexander Müller gets around, whether its with different genres, different bands, or with other artists from across the world. “Verdorben,” the latest single from his art project Aphrodia Okkulta, was released across YouTube, BandCamp, Deezer, and more on October 16.

Müller began his music career as a part of a handful of bands that span many genres, including The Trikes (hard rock, blues), Raw Acoustic (acoustic rock), Godcilioration (death metal), and Internal Decay (death grind). His wide-ranging background and knowledge of many styles of music adds many layers to his music.

His art project Aphordia Okkulta, founded in 2018, has a unique premise. Its inspiration is visual art brought to life by painting, with “Verdorben” being only the latest example.

Aphordia Okkulta’s first release, EP Meta, came in 2018. This was followed by a handful of singles, and I suggest you check out the bands BandCamp page to see the artwork with each one to get the full effect of the projects.

The bands 2018 releases were typically varied in sounds and moods, starting with “Electrion.” Heavy guitars and drums dominate most of the song, before a calmer, synth-y second half. After an intro of choirs and keys, “Nocturnus Sonus” gets riffy and heavy before leading into another emotive, blues-y second half. Hammond organ synth-led “Oxymora” is practically ambient. Its cool, earth-y art is fitting.

2020 saw the release of “Partus.” The track goes back to his death metal roots and features Marcus Friedrich from German Death Metal Band Epidemic Scorn on vocals. 2021’s “Partus Piano Instrumental” is just that, a classical sounding solo piano piece with some more emotive art combined with it.

Müller has been busy with Aphordia Okkulta. EP Daemonium came in January and is a typically varied effort, mixing in ambient and blues on top of its death metal foundation.

The band released their latest single, “Verdorben,” on October 16 (check out the video here). It features guest musicians from Portugal, Austria, Colombia, and Germany.

“Verdorben” is Aphordia Okkulta’s most mature track to date. It begins softly and ambiently with some strings before switching from heavier death metal and mellower sections. The contrast between the atmospherics and heavy guitars and vocals is especially effective.