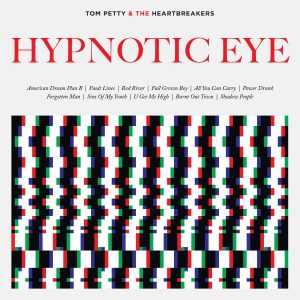 More Than Meets the (Hypnotic) Eye

Hypnotic Eye has the unfortunate distinction as Tom Petty’s last album. It’s so much more than that, though.

The record was billed as Petty and the Heartbreakers homage to the ’60s garage rock that first influenced them. Sure, it is that to a degree, but it’s more a return to the sound of their mid/late ’70s heyday.

And that’s a good thing.

Like all the greats of classic rock, Tom Petty evolved throughout his career.

He followed his jangly, catchy ’70s albums with a series of slick, powerful hits in the late’ 80s/early ’90s, among them “Don’t Come Around Here No More,” and “Free Fallin.'”

After turning another corner with the gritty alternative rock of 1994’s “Mary Jane’s Last Dance,” he teamed up with Rick Rubin and made three of his best, most musically varied albums, Wildflowers, She’s the One, and Echo.

Petty followed this with an inconsistent period.

2002’s The Last DJ, a concept album blasting the greedy record industry, is underrated – the title cut is one of his best songs – but ultimately uneven. Follow-up Highway Companion is slick and sometimes uninspired, while the jammy blues of 2010’s Mojo is endearing but overlong, in addition to lacking the hooks that set apart Petty’s best material.

The Music of Hypnotic Eye

Hypnotic Eye, then, was a return to form. The catchy, consistent record was easily his best since Echo. The album is filled with memorable singles that should have been.

Snarky garage rock throwback “American Dream Plan B,” grooving Bo Diddley influenced “Fault Lines” and “Forgotten Man,” funky “U Get Me High,” and melodic “Red River” would have been hits if rock radio was still cool.

“All You Can Carry” features one of Hypnotic Eye’s best riffs and would have fit nicely on Mojo if it wasn’t so catchy. “Power Drunk” combines the jammy blues of that album with the slick pop of his best ’80s material.

Petty’s final album also found him feistier than he’d been in years.

“American Dream Plan B” has an attitude that hadn’t been seen from him since The Last DJ. John Lee Hooker workout “Burn Out Town” is even more overt in its social commentary (“yeah this is the burnt out town/new Emperor, same clothes/they dancing on the glass ceilings/while the money flows”).

Groove oriented “Shadow People” perfectly describes where so many Americans are at today socially and politically: “I ain’t on the left/I ain’t on the right/I ain’t even sure if I got a dog in this fight/I feel like a shadow’s falling over me.” It ends the album thoughtfully.

Tom Petty sounded fresh when he broke onto the scene in 1976 because he combined the pop sensibilities of the Byrds and Beatles, ’60s garage rock, and contemporary sounds into something uniquely his own. Hypnotic Eye did this better than any album he had released since his ’70s heyday.