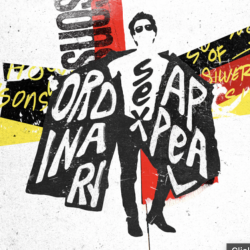 I’ve always had a thing for 90s alt.rock.

Sure, it’s at least partially because it’s the music I grew up with, but it was also the last time that songwriting-forward rock n’ roll was both commercially successful and critically acclaimed. With the advent of bands like Korn and Limp Bizkit, and the decline of rock as a mainstream genre in general, bands that focused on songwriting – melodies and subtlety and the like – were pushed to the fringes.

Fortunately, nowadays 90s alternative and the 00s garage rock thing have more currency than the Korns and Limp Bizkits of the world. A lot of bands are still making fresh music in indie and 90s alternative vein.

That’s where Sons of Silver come in.

“Who’s Gonna Stop Us” is a furious opening statement. Its unhinged energy and recklessness are reminiscent of early punk, only slightly more polished. The melody of the chorus is almost Talking Heads-like.

There’s definitely a lyrical edge to much of Ordinary Sex Appeal, which becomes clear on “ReEducation,” which oscillates between an almost rapped verse and a singalong chorus:

When the truth is found living underground

What do you do? Do you make a sound?

Future revealed in the word ‘comply’…

Look at me and you

I’m on your side too

Power to the people

I see the light

I see the dawn

It’s refreshing to see a rock band push back on mainstream narratives in a thought-provoking way.

“With You” is the calmest track on Ordinary Sex Appeal. The ballad has a haunting melody and overall feel, with acoustic guitars and strings giving it a distinctly warm vibe. There’s some pretty sweet shredding towards the end though.

A catchy bassline from Kury begins “Cause of My Pain,” which is almost New Wave-y pop, and has more of the lyrical edge found throughout Ordinary (“they want to make you heal/make you kneel/make your deal with the devil real”).

The band saves their most overt social commentary for album ending epic “Hesitate.” It’s the snarkiest track on the EP musically, and builds in aggression as it goes on, which fits the lyrics:

I hesitate to make a joke

I hesitate if I get caught

I hesitate to sing out loud

I hesitate to join the crowd

I hesitate with politics

‘Oh my my, there he goes again’

I hesitate to lend a hand

I hesitate to be a man

I hesitate while you go ‘round

I hesitate to make a scene

I hesitate with all extremes

I hesitate with censorship

You see this middle finger flip?

Its punk rock energy is matched by its anti-authoritarian attitude, ending Ordinary Sex Appeal with a reminder of how rock n’ roll can still be edgy and have important things to say.