Royce DeZorzi says goodbye to the Great Southwest with ‘Denver’ 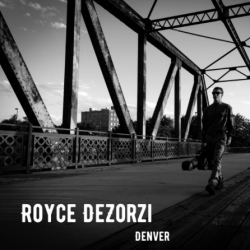 Perhaps Royce DeZorzi hasn’t been everywhere in this here land, but he’s certainly gotten around.

The Annapolis, Maryland native grew up in a military family, so this isn’t too surprising. His family moved to Augusta, Georgia when he was young, and from there he moved to Denver and played gigs throughout the American Southwest. His next move will be to my new home city of Nashville.

His debut solo album, Denver, is something of a goodbye to the state he’s called home for many years.  “I’ve ended up on the outside looking in from a lot of past relationships, friendships, and musical partnerships,” he explains. “During recording, I found myself in the right space to sit down and reflect on some things I’ve learned and experienced here.” He also says that it’s his way to “say thank you and goodbye.”

He does this without lyrics, as Denver is a solo acoustic album. Perhaps it’s better off for it, as sometimes expressive music can speak more eloquently than lyrics. This is certainly the case on Denver. While filtered through his own vision, the solo acoustic performances include shades of classic folk, blues, and country.

Opening “One for the Road” is a typically lyrical piece, which is ironic, of course, because this is a solo acoustic album. Simple, effective fingerpicking underly an expressive melody. “Vision of Chloe” and “Iron Shackle” (check out the video here) have the feel of acoustic bluesman Mississippi John Hurt, who made his first recordings in the 1920s before being rediscovered and much beloved in the 1960s folk revival.

“Tomorrow Will Change Your Mind” is a little more laid back, though the guitar attack is still strong. This flows nicely into “My Eyes Won’t Stop Crying,” another emotive track that uses a nice combination of fingerpicking and hard strums. “Angel” is, for lack of a better term, a bit “pluckier,” a bit more experimental, making it stand out from the pack.

Title track “Denver,” which features an adorable bunny to look at while you listen to it on Spotify, is another jumpy, upbeat fingerpicking number that DeZorzi excels at. It gets good and funky towards the middle. It’s certainly a highlight, so it’s fitting that it was released as a single.

One of the strengths of Denver is that the titles are so evocative that you can imagine the lyrics of the songs as you’re listening to them. Previously mentioned “Tomorrow Will Change Your Mind, “She’s Walking Away” and “I’ve Got to Let Her Go” are great examples. One of the nice things about listening to instrumental music is that you can let your mind drift, let your thoughts come to you, and just get caught up in what you’re hearing without lyrics getting in the way.

Fittingly, “Country Girl” is an upbeat flatpicking number, one of the more explicitly folk/country tracks on Denver. An interesting tuning, and a more strum-y approach, gives “Buttercup” an noteworthy flavor.

Both evoke legendary guitarist John Fahey, who made the best Christmas album of all-time and has some of the best-ever album titles, including The Transfiguration of Blind Joe Death and The Dance of Death and Other Plantation Favorites. He wrote his college dissertation on one of my favorite country bluesmen from the ‘20s and ‘30s, Charley Patton, in the 1950s, before the folk revival brought all those old classic bluesmen back to the fore. Fahey’s influence can be felt throughout Denver.

When I moved from St. Paul, Minnesota to Nashville last year, I helped process it by coming out with a video album, Old Dog Almost Gone. Like Denver, it wasn’t a traditional album with lyrics, but a set of mostly covers, along with some re-makes of my old songs and a couple of live cuts. It was my way of saying goodbye to the place I had lived for so long.

As such, I can personally understand what Royce DeZorzi is going for on Denver, as I’ve basically done the same thing in the last 18 months – I even moved to the same place. He hits the mark throughout his debut solo album, and I’m sure his relocation will be a success.