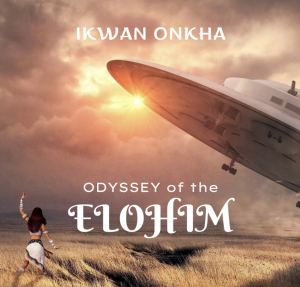 In addition to being a music producer, lyricist, and performer, he’s also a sound designer, sound therapist, and physicist. It makes sense, then, that his music is at the intersection of art and science.

His latest release, Odyssey of the Elohim, is a largely instrumental album that combines New Age, world music, contemporary instrumental sounds, and a bit of classical.

Mostly, it sounds like a movie soundtrack, and that’s intentional. Onkha says that it’s “a collection of music I would have made for an epic film telling the love story of some highly civilized extra-terrestrial humans who arrived on barren earth about 25000 years ago and created all life.” It is meant to cover “the emotional contours of creative adventure, devotion, infinite love, and oneness between the creators and their creations.”

Sounds like a tall order, right? It is, but if you let your mind go, you can get into that head space.

Odyssey of the Elohim opens with the title track. It starts with swirling, almost diggery-do like synths and builds with tribal sounding drums. A cool, simple melody on a piano is surrounded by flutes and more keyboards.

At around the 1:45 mark it builds a bit and then falls, as if ­­whoever is discovering the barren earth of his concept has discovered something out of the ordinary, something shocking, and then moved on to see what else they could find. Staying with the theme, you can see and feel the creators initially walking the earth, planning what to do with what they have to work with.

An ethereal backdrop leads into a dark, intense, minor key piano/cello riff on “The Swasti Star.” At the 1:00 mark the mood shifts a bit, with some lighter melodies on top of the darker background atmospherics.

The rest of the song oscillates between the two, capturing the light and darkness of life and love. You can imagine our protagonists creating life, searching and wondering about their job, thinking about the good and the evil that comes with anything created.

Cinematic third track “Yahweh’s Raven” begins with mellow piano that provides the backdrop of the entire song, a simple, arpeggio-ed riff that sets the moody tone. As on the other tracks, there are layers of keyboards that give it a movie-like quality. The second half features swelling synths that add extra texture.

Mellow, spacey synths begin “Temple of Infinity,” which also includes the flute synths that are used throughout that give the album a unifying character. Its melody is especially bouncy, but as on “The Swasti Star,” light and dark are combined creatively.

“Temple of Infinity” reminds me of David Bowie’s atmospheric work, from his Berlin period on Low and “Heroes” to the soundtrack he did for the Omikron video game in the ‘90s.

Closing “Iye Kama Usu,” the only track with lyrics, is another dreamy piece. The layered harmonies are almost like a chant, with bright electric guitars and piano providing a unique backdrop. There are more cool percussion sounds on this as well, hearkening back to the opening title track. It builds even more than the other tracks, this time into a full-fledged, nearly rock song.

Fittingly, “Iye Kama Usu” feels like it would start at the end of the movie, as it moves towards a resolution, and then over the closing credits. Ikwan Ohkha has created the ambitious movie soundtrack he was hoping for on Odyssey of the Elohim.

Purchase Odyssey of the Elohim here.