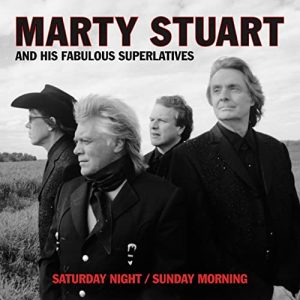 Stuart and his Fabulous Superlative spent the 2010s rolling out one near-perfect piece of country and Americana after another, most notably 2010’s Ghost Train: The Studio B Sessions and 2017’s Way Out West.

Released between these was the ambitious 2014 double concept album Saturday Night/Sunday Morning. The set navigates the tension between the hard partying and good times of Saturday night and the reflective repentance of Sunday morning.

Close Down the Honky Tonks

To best way to take in the concept is on vinyl, where each is separated into its own record.

The first, subtitled Rough Around the Edges, touches on all the highs, lows, and heartbreak of the honky tonk life. Opening double shot “Jailhouse” and “Geraldine” combine a high energy, classic country vibe with rock n’ roll swagger.

Of course there’s also a slower, sadder side to the honky tonk life, and Stuart touches on that as well.

Bill Anderson’s “Talking to the Wall” (“I might as well be talking to the wall/when I tell myself I’m not missing you at all”) is led by gorgeous pedal steel, George Jones weeper “Old, Old House” conjures the Possum beautifully, and the backing vocals on gospel-influenced “Life Has its Little Ups and Downs” are reminiscent of Elvis’ Jordanaires.

Slow, burning “Long Walk to Heaven,” “God Will Make a Way for Me,” and “Heaven” are some of the most soulful gospel music you’ll hear from a bunch of white guys. They are southern, I suppose, so it’s certainly in their blood. High octane “Boogie Woogie Down the Jericho Road” and “Keep on the Firing Line” are also highlights.

Marty’s group, the Fabulous Superlatives, are something like the Beatles of contemporary country.

Cousin Kenny Vaughan on guitar, Apostle Paul Martin on bass (later replaced by legend Chris Scruggs), and Handsome Harry Stinson on drums are each gifted instrumentalists, singers, songwriters, and arrangers. They have songwriting credits throughout, and each take a lead vocal on a gospel song. Check out their power on instrumental “Good News.”

The One and Only

Marty Stuart is one of the last living legends of country music. If you can allow me a moment of indulgence, he’s also one of my heroes. He does more to keep classic country alive than anyone today. Saturday Night/Sunday Morning is essential for anyone who loves American music.