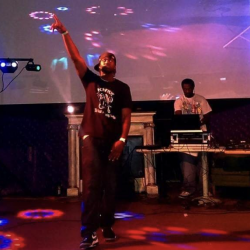 Rapper Lyricool might be from Maryland, but his sound is certainly steeped in his Jamaican heritage. Like so many artists from the Caribbean, his inspired music is crafted with care. His laid-back vocal style is also fitting.

Speaking of his upbringing, Lyricool’s musical formation was spurred on by his dad, who created Raggae tracks as a DJ for basement parties. He has an emphasis on storytelling, as is apparent by his influences, which include Bob Marley, Jay-Z, and Redman.

He began pursuing music in 2008 by playing in various bars and clubs. Years of seasoning paid off, as his 2014 debut album Love Me Today, Hate Me Tomorrow is about as well-polished of a first release as you’ll find.

Lyricool finds his stride throughout Love Me Today, Hate Me Tomorrow. “Roll With You” is the obvious highlight, featuring a creative beat filled with twists and turns. As it is throughout, Lyricool’s flow is effortless, even as it is upredictable. Other highlights include slightly more abrasive (in a good way) “Wrecking Ball” and the heavy “Like a Drum.”

The early successes of Lyricool have led directly to his latest single, “Stranger Things.” Although is debut album is uniformly strong, it’s clearly his best work to date.

Yes, “Stranger Things” is tied in with the popular show of the same name, but in a creative way that you might not expect. Rather than just being about the show, it revolves around the true, straightforward line “I know we’ve seen stranger things,” which has been a phrase Lyricool has often used in his life.

He takes that line and creates something completely new, as the track is about meeting a stranger for the first time. A party atmosphere is called up intelligently, and its filled with effortless, confident lines like “put you in my phone as danger/so I’ll be there when Danger rings/how you this cool with a stranger/I know we’ve all seen stranger things.”

The beat is slightly smooth and slightly bouncy, though not too much of either, with some slightly unearthly background melodies that balance it out. It’s distinctive and evokes some of Drakes better beats.

“Stranger Things” is a major highlight in the already strong career of Lyricool. What comes next for him? His sophomore album is slated to drop in early 2023. “Gonna make this one a lil more rangy,” he says, “and create a whole plate of food that everyone can enjoy.”