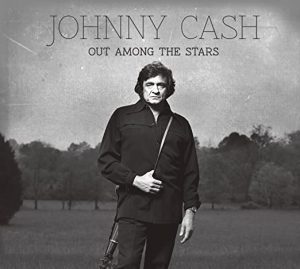 Listening to Out Among the Stars reminds me predominantly of one thing: I miss Johnny Cash.

I miss his wisdom. I miss his humor. I miss his authenticity, his music, and especially that voice. Out Among the Stars is a beautiful, though heartbreaking, reminder of everything we’re missing without him around.

Why Stars wasn’t released in the early ’80s, when it was recorded, is a mystery. Cash supposedly thought it was too pop, but the album that he released instead, 1985’s Rainbow, wasn’t rootsy. Although it benefits from some modern production and mixing, Out Among the Stars is a far better album.

The opening title track is stirring. The story of a liquor store hold-up has all the trademarks of a classic, psychologically strong, and twisted, country song.

“He can’t find a job, but Lord, he’s found a gun” the narrator sings of the sad, sympathetic hero, who sees the guns of the police he’s about to face as “a great relief.”

His executioners are no better: he knows the “familiar anger in their eyes” and that “when they’re shooting at this loser/they’ll be aiming at the demons in their lives.”

The final twist at the end is equally potent, and a final chorus pulls it all together:

The evening news carries all the details

He dies in every living room in town

And in his own a bottle’s thrown in anger

And his father cries, he’ll never live this down

Oh, how many travelers get weary

Bearing both their burdens and their scars

Don’t you think they’d love to start all over

The album’s single, “She Used to Love Me a Lot,” is nearly as good. Cash’s version has been stripped of the ’80s qualities that mar David Allan Coe’s hit from 1984.

Led by a more convincing vocal, its Man in Black darkness gives the lyrics a deeper level of seriousness. On Coe’s you imagine it’s a sunny day in the ’80s; on this version, it’s definitely raining.

Out Among the Stars highlights each part of Cash’s immense personality.

Pastoral, family-oriented, truly country songs like “Tennessee” and “Call Your Mother” are pure Cash. June has never sounded as beautiful as she does on duets “Baby Ride Easy” and especially the lovely “Don’t You Think It’s Come Our Time.”

For hardcore country fans, it doesn’t get much better than Waylon Jennings helping Cash on Hank Snow’s immortal “I’m Moving On,” which also features a couple hot guitar solos. I can’t overstate how cool that is to a country nerd like me. Waylon and Johnny singing Snow! Their harmonies at the end are especially affecting. These are two ghosts that deserve to haunt us.

Listening to it gives me goosebumps every time.

The Humor of Johnny Cash

One aspect of Cash that was unfortunately downplayed when Rick Rubin “rediscovered” him in the ’90s was his playful, although cornball, sense of humor. Nearly every one of his albums has a humorous song or two, and Out Among the Stars is no different.

“I Drove Her Out of My Mind” is a clever, funny story that I won’t spoil for you (go listen to it!). The best line: “well now here she comes to greet me/dressed to kill/and so am I.”

Unfortunately, the joke of the album’s other comedy song, “If I Told You Who It Was,” has been obscured by time.

The narrator is going to the Grand Old Opry to see his favorite female singer who “you know from country magazines.” After the show, her tire is flat (“unlike here body”!) and she asks him to change it for him.

Eventually, they go to his hotel room, where she “performs” for him. It is assumed that this woman is the prettiest, most voluptuous woman in country: Dolly Parton. The last verse, a hilarious punchline if you get it, proves otherwise:

She looked up at me with those big beautiful eyes

Took a deep breath in the side and said:

The last line is delivered by the woman who made it famous: country legend, and elderly woman at this point, Minnie Pearl. For fans of the old country variety show Hee Haw, of which I am foremost in my generation, this hilarious song is a great revelation.

I Came to Believe

Cash was proud that each of his albums contained at least one gospel song. Stars ends with one of his best, “I Came to Believe.”

Although re-recorded shortly before his death, the gorgeous hymn is given a less spooky treatment that fits the song better. It’s one of Cash’s most simple, moving professions of faith.

Simply, the world needs the Man in Black. His absence still affects me over a decade after his death. The quality of Out Among the Stars, a forgotten album made during his leanest time as an artist, is a fitting testament to his legend.