For the love of the music: The engaging beats of IN-L's 'The Universal Eye Compilation' 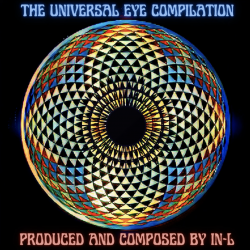 Producer IN-L, birth name Nathaniel Lamont, has been releasing music commercially since July 2021. After only a few months he had amassed over 100 songs on Apple Music, Spotify, and other streaming platforms.

Then he took them all down. Not surprisingly, it was because he wasn’t making any money.

He then took matters into his own hands and gets the best of both worlds: he is creating music for the love of it while also making money.

“I got into commercially making music because I love doing it, because I wanted to share it with the world,” he says. Hence his name: IN-L, or “in love,” which is how he creates music.

His latest album, The Universal Eye Compilation, shows his strengths as a producer, namely by combining engaging drums with contrasting layers of synths and keys. His blend of organic and electronic sounds is also unique.

The Universal Eye begins with “I Love Her.” Simple, tribal sounding drums build into a more electronic arrangement led by swelling synths, some keyboard atmospherics, and heavier, industrial drums over the percussion.

“It’s Now Revealed” builds slowly with an extended drum intro that leads into some nicely contrasting swirling synths. They lay a nice foundation for the dreamy vocals of Leeny Pearls. Just when you think you have the vibe down, a perfectly janky guitar comes in and you don’t know what to think. One of the best things a producer can do is create a beat where you can’t see what’s coming, yet once it does, it feels completely natural. IN-L does this throughout The Universal Eye.

Ironically, “Are You Centered?” is unlikely to make you centered, but that’s a good thing. Interesting vocal effects and some far out guitar make for a unique listening experience. It isn’t like anything else I’ve ever heard, and I hear a lot of stuff.

“Super Star” is IN-L at his minimalistic best, showing what he can do by letting a beat breathe by adding only what’s necessary, in this case a couple of well-placed synth parts. As on many of the tracks, it begins with a syncopated drum beat that lures you in. And if that somehow doesn’t, the sultry, effortless vocals of Daneik Ashley certainly will. “Reach for Help” has a similarly minimalistic template.

Something of an anomaly, “You are Truth” has very minimal drums, featuring only a light beat in the background and some cool syncopated percussion towards the end. The power of “You are Truth,” other than some more great vocals from Ashley, are its smooth, practically mesmerizing layers of synths and atmospherics.

“1st and Down” gets us back to the heavier side of IN-L, with two or three synth parts playing off each other over an aggressive stop-start beat. Layers of vocals give it an almost psychedelic feel. After a sparse beginning, “I Can Relate” breaks into vintage In-L with its intriguing layers of synths. “Take a Break,” which features vocalist Lawrence Ejim, is catchy enough to be on the radio.

As far as interesting-ness of beats – and that’s what I love most about them – “Let Freedom Ring” is a highlight. Who needs vocals when layers of keys and synths weave in and out effortlessly behind another engaging, syncopated drumbeat?

Although it begins aggressively, “Space” floats around like, well, space, almost sounding like the soundtrack for a dream. “Anticipation” has almost an ambient, New Age-y vibe, though its laid-back feel is given a cool contrast with some biting guitar and effected vocal. There’s a lot going on on “Good Times Last,” with some very IN-L sounding drums and spacey synths setting the backdrop for multiple layers of keys and an experimental vocal part that you have to hear to understand.

“We are Them” has the feel of a vintage indie rap track. Its mixture of organic and electric sounding drums and vintage electric piano synths are a backdrop for some more unique vocalizations. Album ending “Release Your Emotions” features the same combination of a spacey, laid-back foundation and contrasting layers of synths and keys that works so well throughout the album.

IN-L creates music for the love of it, and it shows on sonically diverse The Universal Eye Compilation.

Check out The Universal Eye Compilation on YouTube or Apple Music