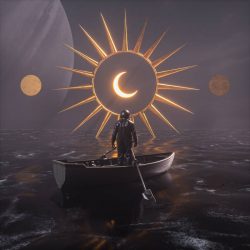 Just the name of The Milgram Reverie’s In-Formation Desert draws you in. It’s also one of those albums that you know will be interesting just by looking at its cover.

The image is as cold and futuristic as it is evocative. A man in a space suit stands in a rowboat on a sterile looking mass of water, staring at a crescent moon inside a sun with multiple points. To the side of this is two full moons of differing brightness. It signifies realization, the end of something, the beginning of something.

Opening instrumental “Nocebo” is something like the cinematic album’s opening credits, almost an overture. Heavy guitars sit comfortably alongside layers of synths and keys, creating something of a template for the album.

The soundscapes throughout In-Formation are varied and expansive, as first track with lyrics “Happiness Machine” shows. It begins with some fast riffs from synths that almost sound like a combination of violin and subtle banjo, but it’s certainly in a rock context. Then it somehow turns into a big, catchy rock song. Expertly done.

“Armillary” gets heavier, opening with a nice, sludge-y riff that unfolds into a super-fast exploration of varying time signatures. It’s at the intersection of metal and prog rock. “Comfort of the Cage” covers similar territory, only the riff is even more interesting. Single “Change the Channel” takes this aesthetic and filters it through early Foo Fighters with similarly successful results.

Placed amid a handful of heavier tracks, “Wanderer” is an acoustic elixir, showing the versatility of band leader C. Aubrey. Evoking the softer moments of bands like Days of the New, I could imagine this one as a hit on 90s alt.rock radio. Aubrey’s voice is the most effective on these sorts of songs.

“Knowhere” goes in a slightly different direction from the rest of the album. It’s a bit slower and has a more straightforward groove, though it doesn’t lose its heaviness. Reminds me of David Bowie’s more industrial material.

The artistry of Aubrey really shines on the more epic tracks. “Alchemical Algebra” begins with some textured, abrasive synths, gets a bit heavier, and then gets a bit slower with subtle piano and textured female vocals. The title track beings heavy, transitions into an acoustic part that features some more cool violin-sounding synths, and ends in sludge-y pop glory.

Lead single “Inverted” (check out the video here) doesn’t have an array of time signatures as many songs on the album do, and it isn’t as heavy, but its space-y mix of pop, rock, and even folk towards the end again show Aubrey’s versatility, and his gift of arranging.