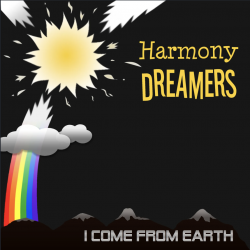 Music is perhaps most powerful when it’s used as a force for good in the world, whether it’s by promoting positive messages or creating something that speaks deeply to people. Harmony Dreamers’ debut album I Come from Earth does both.

Harmony Dreamers is the brainchild of songwriter, producer, author, and multi-instrumentalist Byron Lee Scott. I Come from Earth’s musical foundations – lead vocals, guitars, some bass, and most synths – are all played by him, which is kind of incredible, because every song has layers and layers of instruments. Scott clearly took his time to craft each one.

He isn’t working alone, though – far from it, as I Come from Earth is a global effort, featuring musicians and vocalists from around the world.

In addition to Harmony Dreamers co-founder and drummer Larry Dragland, there are appearances from Irish and Nigerian bassists, Spanish and Venezuelan percussionists, an English clarinet player, and singers from the U.S., Argentina, Austria, and Jamaica. Poignantly, there’s also a bassist from Ukraine and a vocalist from Russia, serving as an important reminder of the uniting power of music.

One of my favorite things about I Come from Earth is how positive and fun it is. It’s dubbed “a global celebration of harmony.” As noted above, it is truly global, but it is equally a celebration. Happiness and positivity flow from each track, making listening to it a feel-good experience in a world that doesn’t have enough of them.

It’s also nice that Scott and company can create music that is family friendly but is also catchy, accessible, and creative. It’s a rare combination.

The opening title track is a fun, funky, and beat-heavy, with layers of guitars, keyboards, and harmony vocals. “I come from earth” is the sort of unifying message that is more necessary every day.

Catchy “Pass it On” is reminiscent of David Bowie’s 90s albums, specifically Black Tie, White Noise. As on “I Come from Earth,” the layers of synths give it a full, spacey feel.

English journalist G.K. Chesterton, one of my heroes, once said that “poets have mysteriously been silent on the subject of cheese.” Another subject that poets and songwriters have neglected? Cats. Scott does his best to fill this void with “Sophie and Pearl,” which also happens to be pretty interesting musically. Its cool old school, analog synths are reminiscent of Emerson, Lake, and Palmer, and the chord progression and feel evoke Tom Petty’s “The Man Who Loves Women” from his 2002 album The Last DJ.

Simple, straightforward love song “You Don’t Have to Say It” could have easily found a home on David Bowie’s 80s albums (that’s a compliment, by the way). There’s even a humorous ending that you can only discover by playing it backwards. “Free Way” has so much going on that it’s hard to keep up. Multiple in-your-face synths provide a backdrop for layers of dreamy vocals.

“No Stopping” is one of the most atmospherically interesting tracks on the album, and that says something. Layers of synths are up front in an aural assault. The heavy drums behind it are also a highlight, especially during the breakdown in the middle. The track is a suite, almost something like Brian Wilson of the Beach Boys would have done in his 60s heyday. Synths toward the end are again reminiscent of Emerson, Lake, and Palmer.

Unsurprisingly, “The First Song Suite” is even more suite-like, although it has more of a Pink Floyd flavor than Brian Wilson. It’s pretty complex, beginning with a rock portion, moving into a jingle that takes its name from Scott’s book “Balance Your Choices,” moves through a couple of rap portions that pulls in lyrics from across the album, and ends by getting philosophical. It even name drops Confucius.

Melodic with a great chord progression, “Spinning Round the Sun” completes a trio of progressive leaning suites at the end of side one and beginning of side two. It again echoes Pink Floyd (see what I did there?), though the production is a cross between a 90s sound and a more modern feel.

Lead single “Summertime Memory” – check out the video here – is the perfect song for summer. It’s fun and catchy, evoking the high sun on a perfect summer day. It includes legendary Irish drummer Graham Hopkins and bassist Robbie Malone, Venezuelan Reinaldo Ocanda on vibraphone and percussion, and Austrian vocalist Alyssa. Scott wrote the song with her vocal style in mind.

Perhaps the most radio ready song on I Come From Earth, though, is “Paro Paro Butterfly,” an infectious electronic dance track that features a memorable appearance from Philippine artist Shiruu. Interestingly, there’s a version in English and a second in the Tagalog language, both with identical melodies.

Middle Eastern-tinged “Waiting for You” is the most laid-back song on the album, serving as something of an “eye of the hurricane.” It also has undertones of French café music. The heavy backbeat that eventually comes in gives it a necessary punch.

Rounding out I Come from Earth  is “Solar Rays,” the third part of the opening suite from side B, “Spinning Round the Sun.” Like “Pass it On,” it would have fit nicely on Bowie’s Black Tie White Noise. Its electronic sound gives it an almost Depeche Mode feel, while the chord progression and spaciness is pure Pink Floyd.

If you want to feel good – and who doesn’t – I Come from Earth is the album for you. The global affair is fun, cool, and thought provoking.

I Come from Earth is currently available on YouTube and will be on all streaming platforms on August 26. It’s also avialable on CD and vinyl at their online store. For more information, check out the Harmony Dreamers website.