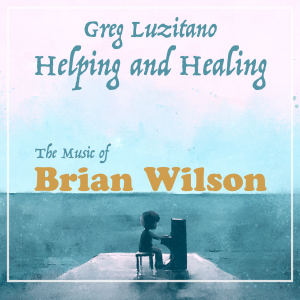 He covered the entire thing?

The Boston, Massachusetts multi-instrumentalist, vocalist, and arranger founded Striving Artists theater company in 2006. He has produced three studio albums and directed many live performances with the group, including a song-for-song cover of Andrew Lloyd Webber’s Jesus Christ Superstar.

Yes, you read that right: he covered the entire rock opera. Released in 2016 to celebrate the ten-year anniversary of Striving Artists, the album featured a cast of actors and singers from Massachusetts, New York, and Florida.

“I spent a lot of time trying to get some of those great late-sixties guitar tones,” Luzitano says, “‘cause I wanted the album to sound sort of rough around the edges like the original did.”

The expansive version of the rock opera did just that, combining the grit of the original soundtrack recording with the pomp of the popular early ‘70s movie version. You can tell he took a lot of time creating instrumental sounds that evoke the original, as evidenced by the guitar tone on “Heaven on Their Minds” and organ/backing vocals on “The Last Supper.”

Also, unlike many later adaptations of Jesus Christ Superstar, it includes both songs exclusive to the movie version, even unduly overlooked “Then We Are Decided.” Other highlights include “Could We Start Again Please” (another movie track) and vocal showcase “Gethsemane.”

Greg Luzitano’s latest project, sprawling double album Helping and Healing: The Music of Brain Wilson, is a similarly ambitious tribute to the founder and creative light of the Beach Boys.

The impetus for the album was simply Luzitano’s love of his hero. “Brian Wilson once sang that he wasn’t made for these times, and maybe that’s true” he says. “His most beautiful melodies are joyful in presentation and form, but with an inescapable melancholy and vulnerability, a sound which expresses the excitement and hope of life while acknowledging its pain…his music moves me deeply, and it’s a privilege to share my own humble interpretations with the world.”

Luzitano only dips into the pre-Pet Sounds, more surf-y oriented Beach Boys songs a handful of times. His take on 1965’s “Help Me Rhonda” is relatively straightforward, while “Don’t Worry Baby” – which, twist my arm, I’ll tell you, happens to be my favorite Beach Boys song – is given a creative acapella arrangement.

Ballad “In My Room” – the Beach Boys first classic, released in 1963 – receives a cool, laid-back approach that fits the vibe of the song. Fun fact: somehow, “In My Room” was the b-side of teeny bopper anthem “Be True to Your School” (“just like you would to your girl or guy”…). Sure, the song is fun, but to say that it’s overshadowed by the flip side is an extreme understatement.

Considering how incredible the material is, Luzitano spends a lot of time on 1966 classic Pet Sounds and the most highly regarded unreleased album of all-time (kinda), 1967’s Smile. “Wouldn’t it Be Nice,” “Sloop John B,” and gorgeous “God Only Knows” are given full, lovingly Beach Boys-infused arrangements, as are acapella standout “Our Prayer,” “Wonderful,” and the ultimate example of Brian Wilson’s “inescapable melancholy and vulnerability,” sardonic “Surf’s Up.”

Some of the coolest moments on Helping and Healing, however, come on the many less obvious choices Luzitano makes.

He spends a lot of time covering tracks from the Beach Boys underrated, lo-fi-ish, somewhat soulful late 60s/early 70s albums, including 1967’s Wild Honey (“Let the Wind Blow,” “Darlin’”), 1968’s Friends (“Busy Doin’ Nothing”), 1969’s 20/20 (“Time to Get Alone”), 1970’s Sunflower (“This Whole World,” “Add Some Music”) and 1971’s Surf’s Up (“Till I Die”). While many of these, including the last four, are given robust, harmony-laden arrangements, many are sparse and acoustic, which really bring out the melodies and cool simplicity of the lyrics.

I’m also glad that he successfully re-creates my second favorite Beach Boys track, “Sail On Sailor,” from 1973’s Holland. Some sweet synths on that one.

If sweet deep cuts are your thing, Luzitano also has you covered, as he tackles lost 1980 single “Goin On’” (from forgotten Keep the Summer Alive) and “The Night Was So Young,” from equally underappreciated 1977 LP The Beach Boys Love You. While perhaps not a stone cold classic on par with “Wouldn’t it Be Nice,” they’re still wonderful Beach Boys songs, and it’s cool that Luzitano unearths them here.

And that’s the bottom line

With Helping and Healing, Greg Luzitano proves once again that it pays to be ambitious. It’s a fitting tribute to a true genius.