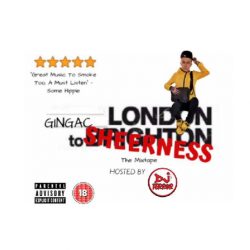 25-year-old English rapper Ginga C released his first mixtape, Modern Day Hippie, in 2019. He spent as much time in its aftermath touring around the UK, and has just dropped his second mixtape, London to Sheerness.

His musical background is varied. He signed to New Level in 2018, putting him in the same company as artsits like Dirty Dapz, Sinxi, M Dot R, and more. Ginga’s influence run the gamut, from rap legends like NWA and Public Enemy to old school artists like Jimi Hendrix to alternative rock like Nirvana. The range of influences shows throughout his music.

“About That Money,” which features Dirty Dapz, features a typically quick flow and witty lyrics. “Backwoods,” featuring Symes, has a very adventurous beat, with synths flying in and out creatively. Like “Backwoods,” “Are You Gonna Ride” is a bit more laid back, with an effortless flow and a contagiously hooky chorus.

“Not Tonight,” which features Tommy Beane, begins with a spoken word intro before breaking into another steady, midtempo flow. “No Competition Freestyle” is one of the most interesting performances from a rapping perspective, you can tell Ginga was tapping into something just a little extra. Plus you gotta love the sample of the sound when you got coins in Mario Brothers.

Like “Backwoods,” fun love song “M.E.L.A.” features a cool array of synths that make for an especially interesting beat. It goes in several different directions. Closing track “Pieces,” which finds Ginga teaming up with Bayymack, ends London to Sheerness on a high note. There are some more cool keyboard atmospherics throughout.

On London to Sheerness, Ginga C builds on the promise he showed on Modern Day Hippie.