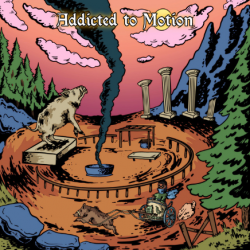 “I’ve been and seen a lot of things growing up,” he says, “but I won’t let that determine where I end up in life. I love having fun on tracks talking about all the stuff I’ve been through, while putting it in my own way.”

His unique flow and singular tone of voice make his debut album, Addicted to Motion, a fresh listening experience. It only clocks in at just under 20 minutes, but he certainly make the most of every minute.

Opening “Gen 5” begins with a smooth R&B vocal hook that makes a good through-line through the entire track. His flow is beyond laid back – he raps like you should care about what he’s saying so much that he doesn’t have to use much force. It isn’t mumble rap, he annunciates and his vocals are up front, but he has such confidence that he doesn’t have to be forceful to get his point across.

Like “Gen 5,” the beat on “Living Proof” has a good combination of organic keys, samples, and some cool drums. “Deeper Than Deep” is led by a guitar sample and some more organic drum sounds.

By “Middle of the Map” Gfm Jm is clearly locked in to his unique, effortless sound. There’s some more cool keys and samples, electronic drums, and a great flow.

The out-of-tune piano sample of “Jungle” that changes throughout the song is one of the most ear-catching sounds on Addicted to Motion. “No Calls,” one of the albums singles, finds Gfm Jm showing off with a faster flow. It has another effective piano sample.

In fact, piano samples are predominant on the album. They give it a coherence and unique quality. Another single, “Giving Hell,” is an example of this.

Gfm Jm begins making his mark in the rap world with Addicted to Motion.