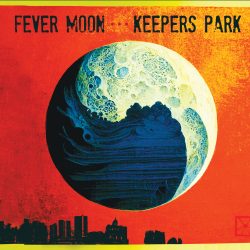 If The Cosmic American had a “Must Hear New Releases” section, Fever Moon’s Keepers Park would be the first to make the list.

Fever Moon, which is based in Tokyo, Japan, features Jay Holmes (guitar, vocals), Nick Bello (bass), and Darryl Baker (drums). There are some interesting guest appearances on Keepers Park as well, including Morgan Fisher (Mott the Hoople), Andy Holmes (ex-War on Drugs), Ken Viawatt, DJ Misty (Toronto Social Club), and Reika Neko (The Nurse). The album was mastered by Matthew Barnhart, who has worked with Bob Mould and Superchunk, among others. Aesthetically Keepers Park evokes both of them.

Album opener “You” evokes late ‘80s/early 90s alternative, especially The Cure melodically, with a bit of Social Distortion thrown in there as well. It’s energetic but has a dark tinge. The arrangement is classic indie rock, with perfectly distorted guitars. An unhinged acoustic guitar in the right channel gives it an extra punch and a bit of a 70s Stones flavor.

“Ronnie Spectre” features a cool, relative minor chord progression. There are more shades of The Cure and Social Distortion, but Holmes and the band certainly have their own unique energy and approach. The songwriting and arranging are tight and well-executed.

A bit poppier, upbeat “Rose” has could easily be a hit single, at least if the radio meant anything anymore. Come to think of it, it’d certainly have a place on, say, Little Steven’s Underground Garage on SiriusXM. Though it’s a bit poppier, it still has a slightly darker edge, and is one of those pop songs that has multiple parts but still flows naturally. The lyrics are also a highlight:

Jesus needed you more than he needed me

I don’t want your love

If it turns me into who I cannot be

Into who I never was

Into what I’ll never be

“Telepathic Seizure” takes a slightly more mid-tempo approach, but, like “Rose,” is accented by intuitive changes in rhythm. The drumming throughout Keepers Park is a highlight. More than keeping the rhythm, they propel each track. The combo platter of acoustic and wonderfully sludge-y electric guitars are perfectly balanced, as they are throughout the album.

All the strengths of Keepers Park are on display on “Giving Up the Beast”: engaging songwriting, high energy, and a perfectly indie rock combination of grunge-y distorted and acoustic guitars. The lyrics again are strong:

Could it be that my ship will ever turn?

Or is it just my time to burn out with the embers?

Who here remembers just who I was?

The ending is also a surprise.

Though a bit more laid back, “Corpus Chris” still features an aural assault of electric guitars. The combination of a relaxed melody with heavy guitars gives it a cool, disconcerting feel. The piano in the coda is a nice touch, too.

“Whistle Talk” is another poppier track, though the arrangement goes in a few different directions that you can’t see coming. It’s catchy, has an engaging melody, and is punctuated by some super cool synths.

Throughout Keepers Park, Holmes isn’t afraid to let songs breathe, as many of them reach over the 4:00 and 5:00 minute mark. There are so many parts that they stay interesting, which isn’t easy to do. “Séance Tonight,” however, is a little timebomb in comparison to many of the other tracks, clocking in at 2:13. The upbeat rock track features some more compelling lyrics (“and all the prostitutes are going to shout out what you conceal”).

The title track is another sprawling rock song. Its multiple parts weave together in a Brian Wilson sort of way, effortlessly flowing from one section to another.

Album closer “Midnight on the Mountain,” which has an English and Japanese version, ends Keepers Park on a lively note, evoking Dropkick Murphys a bit, though Holmes always has a tinge of Robert Smith to his melodies.

Throughout Keepers Park, Fever Moon prove that it’s still possible to make fresh, living indie rock. I don’t say this lightly: it’s one of the best rock albums of 2022.

Keepers Park will be released on November 4, 2022, on Bifocal Media/UnusMundus. Check out their website for updates.