Fever Moon gets more introspective on their second album of 2022, ‘The Long Chains of Love’ 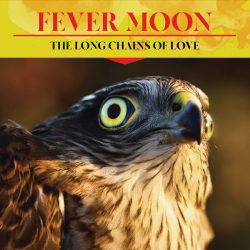 On Keepers Park, one of the best albums of 2022, Fever Moon evoked 80s and 90s alternative rock, with an emphasis on the rock. The gritty release conjured bands as diverse as Social Distortion, Superchunk, and, melodically especially, The Cure.

On The Long Chains of Love, the band takes something of a left turn. The album is more introspective, while still having their usual gritty, rock edge. The results are equally impressive.

Opener “Holiday Hill” is explicit about its change in direction from Keepers Park. The effortless, emotive ballad brings to mind The Cure’s most effective moody tracks. More than that, it’s quite Bowie-esque, and in the best possible way. It’s reminiscent of his best and sometimes overlooked 80s material. “Absolute Beginners” comes to mind.

As far as an album opener goes, “Holiday Hill” has something of a “Tears of Rage” vibe, the unhurried, relatively long opening to The Band’s Music from Big Pink. It takes guts to open an album with a track that isn’t big and ear-catching, but the risk pays off with “Holiday Hill.”

“White Sand” is reminiscent of classic midtempo Cure material like “A Forest,” only filtered through late ‘80s punk and the heavier side of ‘90s alternative. Its relatively laid-back vibe, like on a handful of tracks on Keepers Park, is contrasted with some cool, unhinged electric guitar atmospherics.

Compared to the rest of The Long Chains of Love, and Keepers Park for that matter, “Candy Fight” is downright jaunty, though there are still characteristic layers of heavier guitars that give it an edge.

Similarly upbeat “Judgement Day” is one of the more Keepers Park-like tracks on The Long Chains of Love, both in terms of instrumentation (a combo platter of gritty electric guitars with an acoustic guitar to add color) and songwriting (another lovely relative minor chord progression).

Things get a bit esoteric again with “Faith in You.” One of the strengths of the songwriting of Jay Holmes, the leader of Fever Moon, is his ability to write songs that are over four or five minutes that are catchy, engaging, and don’t lose your interest. “Faith in You” is a good example. Clocking in at 5:25 and featuring no drums, the track is led by emotive atmospherics.

“Chances” is even more ambitious, clocking in at almost seven minutes, but again never getting dull. It builds from an acoustic opening half into all-out rock, utilizing the very Fever Moon combination of heavy, gritty guitars behind melodic rock and pop.

“Heaven’s Hole” is a good example of the differences between Keepers Park and The Long Chains of Love. Though it has the heavy guitars and melodic emphasis of the former, it is more introspective, especially from a pure songwriting perspective, and lyrically:

You know my blood boils down to gasoline

My soul’s too savage to be clean

And love is sacred

But the time that it’s taken leaves me cold

And I’m falling down my way to Heaven’s Hole.

A cover of legendary Arizona hardcore band Malignus Youth’s “Carousel” shows their clear influence on the band. One of the punchier tracks on The Long Chains of Love, in a perfect world it’d get heavy play on rock stations.

Fever Moon goes in another direction on “Hardcore Kid,” which has almost a jaunty 50s dance type beat. The almost nostalgic song takes an honest look at the past:

Stain your fingers dye your hair

Well, my dad, he just ain’t there

And you’re my friend now, you’re all I got

So I’ll stare down the dream with you.

Less than zero so there’s nothing to lose

Spend a lifetime following the busted story of youth

The Long Chains of Love ends with another ethereal, emotive acoustic track, “Dust on the Bone.” The “songwriter’s song” is a fitting finale to an album that finds Jay Holmes exploring his more introspective side without losing his rock edge.