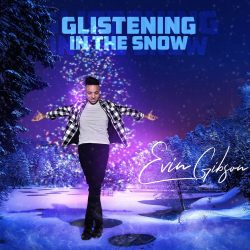 Every year, we hear the same Christmas songs at malls, on TV, and on the radio. Even when new artists do Christmas albums, they’re usually filled with versions of the classics.

That’s why it’s refreshing when an artist has the courage to come out with an album of original Christmas material. Evin Gibson does exactly this on his latest release, Christmas album Glistening in the Snow.

Evin Gibson is an award-winning singer, songwriter, model, and actor. His smooth vocal style fits his unique mix of pop, R&B, and soul.

Gibson has five singles on streaming services that he’s released since 2014. He has been especially prolific in the last few years, coming out with a handful of soulful singles like “Come Back Around” and “Blu” in 2021 and “Alarm” in 2020.

The entirety of Glistening in the Snow has a sweet, soulful R&B sound. It reminds me of Gerald Levert in a lot of good ways.

The album begins with “Holiday Party,” which features an appearance from Asheron Bosley. The fun piece of soulful pop brings to mind Michael Jackson and the best of 80s R&B.

“Get in the Spirit” follows. Again, I’m hearing shades of Geral Levert, who is one of my heroes, so that’s definitely a good thing. Like the entirety of Glistening in the Snow, it has a calming quality, reminiscent of a new blanket of snowfall on a winter morning.

Things get a little mellower with “All is Well,” a ballad with all the sweet soulfulness that you’d expect from Gibson. A calming electric piano leads the arrangement, with Bobby Sasquatch’s saxophone echoing the vocals well. If I were Bobby Sasquatch, I’d change my name to Bobby Saxquatch, just saying.

Christmas-sounding sleigh bells and some Michael Jackson vocalizations begin “Special Night.” A 180 degree turn from “All is Well,” it’s an upbeat piece of pop soul that’d be perfect for late in the night at a Christmas party, after the leftover from Christmas dinner are put away and you’re enjoying a glass of eggnog by the fire. As on “Holiday Party,” “Special Night” features the vocal talents of Asheron Bosley.

“Sing Joy” begins with a distorted beat and piano before opening up into another delightful piece of pop soul. The piano throughout the track adds a lot. The lyrics are some of the best on the album. It has almost a gospel feel, from the words to the choir of voices that answer the main vocal lines. Happy and upbeat, Gibson brings you to church in a very good way on “Sing Joy.”

“No Greater Gift” is another mellow, classic R&B sounding track. As on many tracks throughout Glistening in the Snow, the beat stands out and gives it necessary backbone.

The album ends with “Need Love (All Year Long).” Gibson begins the track with the effortless falsetto that he features throughout the entire album. The drum machines evoke the best 80s R&B, and it’s as silky smooth as the other tracks on Glistening in the Snow.

But wait, there’s more: an acoustic version of “Special Night.” It strips the song to its bare essentials, putting Gibson in a different atmosphere that he enters with the confidence and swagger that he does on the fuller R&B material.

Admit it, you’re tired of listening to the same Christmas songs. If you love old school R&B and soul, add Glistening in the Snow to your holiday music rotation.