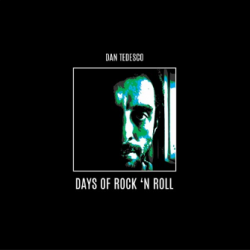 This past July, Iowa songwriter Dan Tedesco celebrated the second year of his music platform, The Dan Tedesco Music Channel.

Rather than dealing with finicky social media algorithms and getting a quarter of a cent per download on streaming platforms, Tedesco took matters into his own hands, creating a subscription site that features his entire back catalog, exclusive performances, and most of his new music.

Though he’s released a handful of singles and EPS in the last two years, Tedesco recently began rolling out his first full-length album on the site, Days of Rock n’ Roll.

Hearing an album a single song at a time, with liner notes for each track and some additional notes about inspirations, is kind of a trip. It feels like you’re inside of the album, like you’re unfolding with it. It’s like you’re an actual part of it. That you’re a part of an exclusive community that can hear it adds another dimension.

It doesn’t hurt that Tedesco is one of the strongest songwriters in the Midwest, if not nationally. His songs have an Americana and rock basis, but also incorporate folk, blues, jazz, and experimental sounds. He’s able to put forth ideas and messages in songs without beating you over the head with them, channeling the subtlety of songwriters like Dylan, Petty, and Neil Young.

Tedesco doesn’t release all his music exclusively on the DTMC. You can stream “Lost Art of Conversation,” the single from Days of Rock n’ Roll, on all the usual platforms.

Led by a slightly distorted fingerpicked guitar and filled out with subtle drums and keyboard atmospherics, the acoustic-based track is evocative and intimate, as the entire album is shaping out to be. The lyrics are an intelligent, emotional reading on contemporary culture:

What it means to be human, how to make a change

In pursuit of the Lost Art of Conversation

“The songs, and the stories within, seek to connect pieces of our past – where we’ve come from, who we are – with where we will go and who we will become,” Tedesco says of the themes on Days of Rock n’ Roll. “Lost art of Conversation” is a prime example.

While that track can be found on streaming platforms, the rest of the album is being rolled out exclusively on the Dan Tedesco Music Channel. Three other tracks, “Halsted & Diversity (2:15am),” “Everybody’s Lookin’,” and “Moral and Profit” have been released so far.

“Halsted & Diversity (2:15am)” is a short introductory instrumental that begins with straight acoustic fingerpicking, builds with some distortion, and ends with some tapped harmonics, a nod to one of Tedesco’s heroes, Eddie Van Halen. “This opening instrumental puts us in Chicago, late-night,” he says. “This particular intersection is right around where I first started playing out in the city. Chicago plays a role in this record, as you’ll soon find out.”

Everybody’s lookin’ for somethin’ to hate

Another headline or another debate

To whisper with their friends

Everybody’s lookin’ for somethin’ to hate

Everybody’s lookin’ for somethin’ to love

Like the smell of the grass ‘n a baseball glove

To peel away the time

‘N freeze ‘em in their prime

Inspired by legendary producer Daniel Lanois, the track features no guitars, only haunting keyboard atmospherics and understated percussion, which accentuate the lyrics and allow them to take their place in the forefront. The contrasting demo, which features guitars that got taken out, can be found on the Dan Tedesco Music Channel.

“Moral and Profit,” the latest track from Days of Rock n’ Roll as of September 6, navigates the complicated relationship between business and art. The opening verse is some of Tedesco’s coolest and most esoteric:

I have this incense ‘n when it burns

Takes me to Chicago at the turn

Of 24 on a cool morning in May

As the smoke ‘n memories peel off it

Somewhere long before the deal

Between Moral and Profit

Like the other tracks on the record, “Moral and Profit” is sparse and intimate, highlighted by a tight groove and catchy, engaging melody.

But, like “Halsted & Diversity (2:15am)” and “Everybody’s Lookin’,” the only way to hear it is to directly support Dan by joining the Dan Tedesco Music Channel. The new, unprecedented way to support a musician for everything they put into their music is far more edifying than a casual visit to a streaming service.

Members of the DTMC have access to a playlist with each track from Days of Rock n’ Roll. To look at the four songs listed it and know it’ll keep growing until the album is complete, and you’ll be there, an actual part of it, as it unfolds, is a new feeling and an entirely new way to process music.