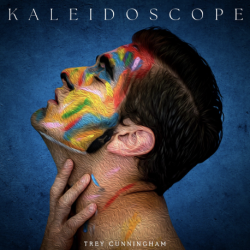 Songwriter Trey Cunningham has had a busy month or so.

On September 9th, he released his awaited debut album, Kaleidoscope. He’d released many singles in anticipation of its release, but collected them all of Kaleidoscope, with the addition of a few more tracks. Each of them show the strength of his songwriting and approach.

Cunningham’s debut album Kaleidoscope shows the variety of songs and sounds that he has up his sleeve. His music combines pop, minimalism, and even a bit of hip-hop. He has a style and quality about him that isn’t always easy to pin down.

Kaleidoscope shows his, well, kaleidoscopic approach to music. “Stargazing” is equal parts poppy, ethereal, and minimalistic, with each sound combining freshly and uniquely. Cool piano-led ballad “Brand New” shows his catchier side, especially on the big chorus. Cunningham excels on his more ballad-oriented material, though each of his approaches has its charm.

Spacey synths and nicely contrasting drum samples fill out “Wreck,” which is another poppier one. You can tell that Cunningham has studied his craft well. “Little Voice” is effortless, while the synth pallet on “I Miss You Type” evokes the 80s, but also sounds fresh. The 80s are cominb back, right? Or are already back. If only those influenced by the 80s creatively incorporated those sounds as well as Cunningham does.

Album closing “You Built Me,” a piano ballad that features interesting layers of keyboards, vocals, and drum samples, puts on full display all of Cunningham’s strengths.

Not satisfied with a string of singles and debut album in 2022, hot on the heels of Kaleidoscope, Cunningham has released another single, “Internal Revenge,” and it’s his most mature to date. It combines his pop and ballad senses with his slightly edgier, more minimalistic side.

“Internal Revenge” begins with a simple, effective piano riff, which evokes the best parts of Kaleidoscope. Layers of synths make it an interesting listening experience, always keeping you guessing with their placement, though also coherent. Indeed, “Internal Revenge” is certainly a radio ready track.

It builds from its mellower beginning into a fuller piece of pop music. It’s highly melodic and flows effortlessly from one section to another. A song of longing and regret, “Internal Revenge” is relatable in a way that draws you in. Again, it certainly has the catchiness, attitude, and freshness of a radio hit.