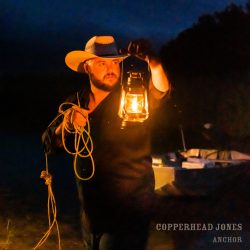 I’ve seen many songwriter’s circles since I moved to Nashville last year. They often feature artists whose songs are as catchy as anything on contemporary country radio, yet also have more of an organic edge that make them far more interesting.

Copperhead Jones reminds me of those songwriters.

Jones began writing songs while deployed in the Navy in 2012. He’s been releasing singles for a couple of years, but recently came out with his strong debut album Anchor.

After a mellow, moody, pedal-steel laden beginning, opening track “No One Givin’ Up” quickly turns into an energetic piece of country rock. Upbeat and catchy, it’s the sort of song I wish country radio played more of.

Midtempo ballad “Where the Heart Will Always Be” follows, accentuated by a driving fiddle. Its theme of family connections continues with laid back “Travelin’ Dad,” an emotive story about a father who works so much that he struggles finding time to spend with his kids. Copperhead Jones is a storyteller in a distinctly classic country sort of way.

Don’t get me wrong, I’m something of a defender of pop country, even bro country. It isn’t my thing, but I understand it’s appeal. It’s big, it’s fun, and it gets pretty girls dancing. Lest we forget, country has been pop since at least as far back as Chet Atkins adding strings and choirs to it in the ‘50s. Going farther back than that, the first country million seller, “Wreck of the Ol’ 97,” was sung by a classically trained singer.

As much as I defend it, modern pop country and bro country simply don’t have the soul of artists like Copperhead Jones. The title track of Anchor is a good example. The acoustic ballad intelligently touches on the difficulties of life:

Another lost sailor carrying an anchor

Chained to every thought

Another lost sailor carrying an anchor

But it shouldn’t be this hard

The track is led by an effective combination of chunky electric guitars, organ, and pedal steel.

Copperhead Jones the storyteller comes out on the next couple of songs, upbeat honky tonk outlaw track “Lonesome Shadow” and coming-of-age “The Hard Way.” He shows love for his adopted home state on effectual “Texan All the Way” and, reversing the old country cliché, talks about how much he loves his dog, not about how it died, on “Man’s Best Friend.”

Anchor is rounded out by three strong tracks. Radio ready “Burnt Cigarettes” tells the story of a marriage that’s falling apart, “Can’t Say No Eyes” is a rare happy love song from Jones, and “Cold Beer and Tight Lines” is pure country fun.

Modern country radio is good for what it is, it just isn’t as good as songwriters like Copperhead Jones.