Eavesdropping on the creative process of songwriter Alex Domian 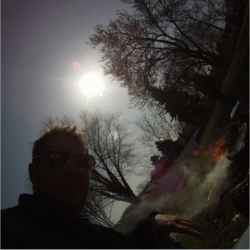 When you listen to the sketches, demos, and full band tracks by songwriter Alex Domian, one thing becomes immediately apparent: he’s coming at this whole music thing from a lot of different angles. His music ranges from tender acoustic ballads to all-out metal. In between you have spacey hard rock and  shades of 90s alt.rock.

The Cosmic American was fortunate enough to receive some of his work more fully realized work a few months back, and now we’ve been given the opportunity to eavesdrop on his demos and sketches. They’re revelatory, as varied as you’d expect in textures, and lovingly lo-fi in sound.

Solo acoustic “If” is also in this vein. Perhaps Domian’s best, most tender vocal, you can feel it when he pleads, “if I told you that I love you/would you believe me?” As far as pure songwriting goes, this is among his best.

As a songwriter, “Voodoo from Hell” reminds me of a million little demos and sketches that I have scattered across phones, 4-tracks, and hard drives. The title is an apt description: it’s 1:10 of swirling, heavy guitars. Short, scorching guitar solo “Inner Feelings,” clocking in at :41, is another cool sketch in this vein.

I have a special attachment to “Bassackwards,” which, like “Voodoo from Hell” and “Inner Feelings,” is another short, lo-fi sketch. A blistering guitar solo (that get more unhinged as it goes along) is accompanied by layers of backwards guitars and loops. It’s super fun to record stuff like this, and a neat mind fuck to hear it.

I’m not sure I’ve ever heard anything like “Who.” A dark, almost Alice in Chains-y guitar and keyboard intro gives way to a weird mix of alternative and 80s pop. Then, out of nowhere, it gets heavy, only to transition back to the spacier bits. The lo-fi sound only adds to its appeal, as does Domian’s perfectly textured vocals.

“Reality” explicitly evokes 90s alt.rock, specifically Soundgarden and Alice in Chains. The interplay between the guitar parts and keyboard riff is a highlight.

Lest we forget Domian’s legitimately heavier side, “Lost in You” is wonderfully sludge-y, with double kick drums and all. It’s reminiscent of grittier 80s pop/rock, with bit of glam and metal thrown in. The vocal is straight up Layne Staley, and that’s definitely a compliment.

“Jane Street” is something of an epic. A quiet, fingerpicked electric guitar beginning transitions into a heavy, almost jungle sound, before becoming more straightforward pop/rock. The track showcases Domian’s talent as both an arranger and melody writer.

Another heavier track, lovingly lo-fi “Over and Done With” is highlighted by scorching guitar and cool, spacey vocals.

“Alone Am I” might have the best atmospherics of any of these songs. The short instrumental flows effortlessly. Some more great guitar work is backed by ethereal, effective rhythm guitar.

Returning to more acoustic oriented material, “Original Negativity” and “Blue” evoke the best of dark, sparse Alice in Chains. Like “Smile on Me” and “If,” they shows Domian’s pure songwriting ability.

A catchy bass riff opens “75 Cents” before it evolves into another classic heavier Domian track. One thing I haven’t emphasized is how engaging his melodies are, hovering above the music in a perfectly 90s alt.rock sort of way.

Like his cover of Bob Dylan’s “Meet Me in the Morning,” his solo take on Neil Young’s “Don’t Let It Bring You Down” gets  to the essence of the song. It also show how affecting Domian’s voice can be.

“Hidden Track (This is It)” is the ideal coda for all this material. The short, acoustic instrumental has a “closing of the curtains” quality that makes it the perfect closing track.

I was honored to have the opportunity to hear Alex Domian’s more polished material when it was first presented to the Cosmic American. I’m even happier that I was able to get a look behind the curtain to see what his creative process looked like with this batch of demos and sketches. He’s truly a hidden gem, his work often surpassing clear influences like Alice in Chains and Soundgarden, especially in subtlety, melody, and pure songwriting.